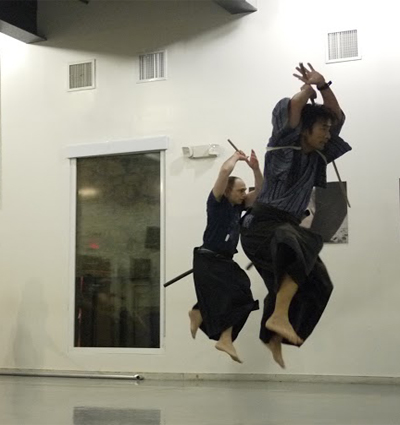 Actor/Sword performer/Fighting Choreographer/Director. After studying under the samurai master, Tahei Waki, Yoshi formed the theater company, Samurai Sword Soul, in 2003, and has been entertaining audiences in the US, Canada, Brazil, and Europe. He has been seeking for the ultimate sword fighting and entertainment. Following the group’s success, Yoshi obtained the title character for the TV series, Samurai Sportsman, (OLN), and was invited as a guest of Late Night with Conan O’Brien (NBC). Theatre credits include the leading role and co-choreographer in the Off Broadway Show, Deadly She-Wolf Assassin at Armageddon! at La Mama Theater, which was highly acclaimed by New York Times. World Seido Karate 4th Degree Black Belt, NYC Kendo Club 1st Dan, Musojikiden Eishinryu Iai.

The Sword Fighting Class of Samurai Sword Soul Style, which is based on centuries-old traditional sword fighting from Japan, Waki Ryu, and the essence of Kendo, Iaido, Karate and Kabuki dance. In this class you will learn very basics of sword techniques such as walking, gripping, breathing, cutting, and stances. You will use all of these techniques in the combination activity. You will then move onto the practical part, including sword contact with others as offense and defense. You will learn the sword technique of stopping, bouncing, dodging, parrying, sliding, cheating, etc. We may do Kakari Keiko (one vs multiple), one on one, depending on the situations. At the end of class you will learn a combination/choreography. This class is for beginners and experienced students. Everyone will join the fighting scenes as one on one or one on multiple with music as the SAMURAI SHOW TIME! You will learn how to stay highly focused on watching, memorizing and performing. This is a great training class for anybody looking to strengthen their concentration.