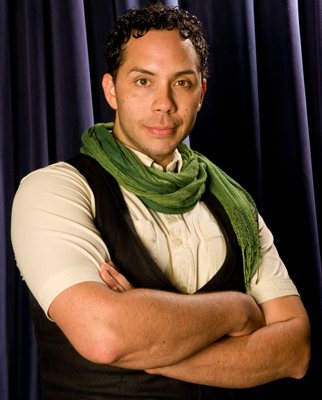 Mr. De Jesus, is a native Nuyorican, otherwise known as "Freddie," began his training at Nannette Bearden Contemporary Dance Theatre in 1987. He then continued his studies on merit scholarships at Alvin AileyAmerican Dance Theatre and later at the Dance Theatre of Harlem in New York City.

His extensive professional experience includes Dayton Contemporary Dance Co., Donald Byrd/The Group, Florida Dance Theatre, Philadanco, the Bruce Wood dance company . Freddie has trained alongside and worked with many successful professionals throughout his 20+ year’s career in DANCE. He’s performed many legendary modern dance works and has worked with a range of dance pioneers as well as amazing contemporary dance innovators. De Jesus has benefited from working alongside choreographers such as: Donald Mckayle, Eleo Polmare, Milton Myers, Annabella Gonzales, Nathaniel Trice, Donald Byrd ( tony award nominated choreographer to “The Color Purple” on Broadway), Mia Michaels(of Celine Dion in Vegas and “ So You think you can Dance”), and Dwight Rhoden of Complexions Contemporary Ballet.

Mr. De Jesus has also served as faculty and guest instructor at a variety of Florida Performing Arts Schools , University programs and esteemed dance institutions from throughout the US, he has also served as a guest to the Florida Dance Associations Young Dancers Workshop, as well as recently being invited as faculty in Connecticut at the Earl Mosley Institute of the Arts. In 2010 De Jesus Mr De Jesus recieved honorary mention from the Hispanic Chamber of Commerce for his contribution to Arts and Culture within the state of Florida and was commissioned to create and original work at El Museo Del Barrio in Spanish Harlem NYC. Mr. De Jesus is thrilled to have been appointed as the Associate Director and Resident Choreographer of Florida Dance Theatre in 2003, and has dedicated his position to creating and fostering the development of innovative works on the dynamically versatile dancers of FDT.