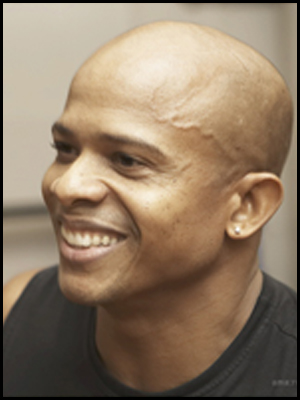 
Djoniba Mouflet is the Founder and C.E.O of the Djoniba Dance Centre and is a pioneer in establishing African and Pan-African cultures at the forefront of the world stages. He is a dancer, Choreographer, Musician and music composer with an extensive artistic background that includes also Acting, Ballet, Jazz, Modern, Hip-Hop, Afrobeats and Drumming. He has taught and performed all over the world and is a much sought-after teacher, performer, choreographer and composer.

Talented, creative and charismatic, Djoniba Mouflet's story is an inspiring one. He has come a long way from his impoverished childhood in Martinique, his days without food in Africa, and his nights sleeping on the New York City subway to his current success, never allowing financial barriers to stop him from following his dreams.

Djoniba was born in Martinique, and spent many of his childhood years in Senegal, Mali, and Guinea, West Africa, where he trained with renowned masters of West African drumming and dance in small villages, as well as in performing arts schools and companies. Years later, his unique talent won him a scholarship and sponsorship by the Dance Theater of Harlem, inviting him to come to the United States.

Through his extensive experience in African, ballet, jazz, and modern dance, as well in music and acting, Djoniba is now a much sought-after teacher, performer, choreographer and composer. He has taught and performed in venues ranging from Disneyworld and Busch Gardens, to concert halls across Europe, Africa, the Caribbean, South America, Canada, and Japan. He has choreographed, danced, and played music with Spike Lee, Chaka Khan, Will Calhoun, Al Corley, Kid Creole and the Coconuts, Lindsay Wagner, Olatundji and many others.

Over the last eighteen years, Djoniba has created and perfected an amazing blend of floor exercises, yoga, and African dance – performed to the captivating power of drum rhythms – that has become one complete fitness program called Joneeba™. This technique exercises both mind and body, and also feeds the spirit. Devotees have followed him for eighteen years from one studio to another, and for the past twelve years to his own very popular and award winning Djoniba Dance & Drum Centre in New York City. He has achieved guru-like status among the thousands of individuals who have studied with him worldwide and the many who currently crowd into the Djoniba Dance and Drum Centre each week. His students have included Julia Roberts, Brooke Shields, and Roshumba, as well as Iman and Montel Williams’s children. He has also taught thousands of children from low- income families to dance and drum for free and started a not- for-profit children’s program 12 years ago, committed to inspiring young people and helping them gain discipline, confidence, and success in life.“Just because they lack funds, children should not be deprived of the power, self- discipline, and joy that dancing, drumming, sports, and the arts provide,” says Djoniba Mouflet, who is tireless in his work as a humanitarian.

Djoniba’s teaching of African dance to adults and children has profound results: one’s body finds freedom in the power of rhythm. Now, with his DVD, he is bringing the uplifting rhythmic movements of Africa and the joy of Joneeba™ to millions.

Joneeba™ classes are a celebration of life and health! Even if you've never danced before, Djoniba can show you how to develop a stronger, leaner body through an effective stretching, strengthening, and toning warm up, and simple yet energetic dance movements from Mali, Guinea and Senegal.