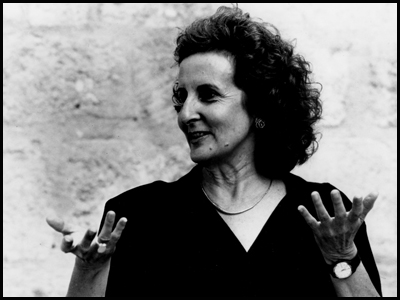 Trisha Brown, the most widely acclaimed choreographer to emerge from the postmodern era, first came to public notice when she began showing her work with the Judson Dance Theater in the 1960s. Along with like-minded artists including Steve Paxton and Yvonne Rainer, she pushed the limits of what could be considered appropriate movement for choreography, and in so doing changed modern dance forever. This “hot-bed of dance revolution,” as one critic of the time called the Judson group, was imbued with a maverick spirit and blessed with total disrespect for assumption, qualities that Brown still exhibits even as she brings her work to the great opera houses of the world today.

Trisha Brown is the first woman choreographer to receive the coveted MacArthur Foundation Fellowship and has been awarded many other honors including Brandeis University’s Creative Arts Medal in Dance, two John Simon Guggenheim Fellowships, and the National Medal of Arts in 2003. She was named Chevalier dans l’Ordre des Arts et des Lettres by the government of France in 1988; was elevated to Officier in 2000; and then to the level of Commandeur in 2004. In 2005 she received the Benois de la Danse Prize for Lifetime Achievement, a significant honor generally reserved for ballet artists. This past December in Monte Carlo, Brown received a Nijinsky Award for achievement. Ms. Brown’s "Set & Reset" is currently included in the baccalaureate curriculum for French students pursuing dance studies. She was a 1994 recipient of the Samuel H. Scripps American Dance Festival Award, has been named a Veuve Clicquot Grand Dame, and, at the invitation of President Bill Clinton, served on the National Council on the Arts from 1994 to 1997. In 1999, Brown received the New York State Governor’s Arts Award. She has received numerous honorary doctorates and is an Honorary Member of the American Academy of Arts and Letters.