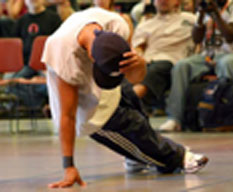 Kenny, “Ken Swift” Gabbert is one of the greatest influences the dance of B.Boying has known. Considered “The Epitome of a B.Boy”, B.Boys and Girls have emulated Ken Swift’s image and style worldwide and is credited with establishing movements critical to the dances’ foundation, with his personal style and original techniques. He is a true pioneer recognized worldwide for his continued contributions throughout the last 30 years of promoting, educating and preserving the art form. His career began the 1980's as an original member and Vice President of the world renowned "Rock Steady Crew", who were responsible for bringing Breaking to many different parts of the world though extensive tours and classic Hip Hop films such as “Style Wars” (1982), “Wild Style”(1982), “Flashdance” (1983), “Beat Street”(1984). Ken received a “Bessie Award” for choreography for the first Off-Broadway Hip Hop Musical, "Jam On The Groove," as well as a Drama Desk Award nomination for Best Choreography. As a pioneer of B.Boy culture he’s received various Lifetime Achievement Awards; one from The Mighty IV, a nationally renowned Breaking event in California, a Louis Reyes Rivera Lifetime Achievement Award at Amherst College, as well as Hall of Fame Living Legend Award from the Korean Tourism Agency which declared him as an Honorary Ambassador of Korea and positive youth cultures worldwide. Ken is a multi-talented artist who continues to enjoy the dance for its true worth, freedom of expression and love of music.

The BBoy BGirl Breaking Fundamentals is an ideal start for any dancer interested in learning "Breaking” or BBoyin/BGirling. It is a dance directly inspired by intense break parts within songs that had percussive drum and instrumental sections. Its movements are in response to these breaks and involve rhythm, style, character, and body control. Ken Swift, will be taking students on a traditional, fundamental, and philosophical approach to the art of Breaking. He incorporates the history, and present state of the dance, including fashion influence & terminologies, as it is integral to the intensity of the training. It is an introductory fundamental workshop but will challenge and fine-tune the skills of more advanced participants.