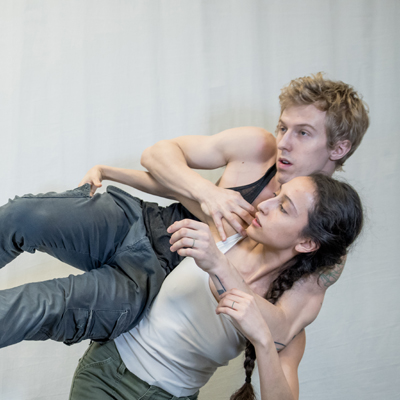 BAIRA | MVMNT PHLOSPHY is a Detroit based physical dance-theatre company. Born circa 2014, out of the collected and ongoing research of collaborative duo Shaina and Bryan Baira. The company’s choreographic work is known for their rigorous and athletic movement vocabulary, highly calculated partnering technique and a deeply personal theatricality. BAIRA productions revolve thematically around relationships and life, seeking to inspire consideration for the potential of our human experience. Shaina and Bryan began working together in 2014 when their first collaboration, "Bench Duet", was selected as the DanceNOW at Joe's Pub "Audience Choice Award" Challenge Winner. From 2015-16 they were East Village Dance Project (NYC) Company in Residence and received the Laban Institute of Movement Studies - Atelier Award.

From 2016-18 Shaina and Bryan were chosen to participate in Pentacle's 2-year research and artist capacity-building program, "Administrative Resource Team (A.R.T.). In 2017 they were awarded a creative space grant by The Alliance of Resident Theatres/New York and were Lower Manhattan Cultural Council Workspace Program Recipients for the 2017- 18 season.

In Summer 2018, Shaina and Bryan were invited as the inaugural Dance Artists in Residence at The Wassaic Project as well as invited to Participate in The Watershed Laboratory 2018 at Mt. Tremper Arts. Shaina and Bryan relocated to Detroit in July 2018 and in collaboration with Wayne State University, have launched 'BAIRA Intensive Detroit' - Summer and Winter International Training Intensives for professional/pre-professional dancers. Since their relocation, BAIRA's choreographic work has been presented at the Museum of Contemporary Art Detroit, The Bonstelle Theatre, Andy Arts Center, Light Box Theater and the Allesee Studio Theatre. As of March 2019, BAIRA has officially joined forces with the Maggie Allesee Department of Theatre and Dance as Resident Company of Wayne State University, and is fiscally sponsored by the Music Hall Center for the Performing Arts in Detroit.

This class will focus on the cycle of connecting, disconnecting and reconnecting, allowing us to move through our bodies and our lives with greater flexibility and strength. Using improvisation, floorwork, contemporary partnering and different physical tools/games, we will challenge our creative movement instincts; refining our reflexes and becoming more confident in our moving bodies. We will explore trust, vulnerability and responsibility with the energy/weight we give and receive.

Bryan Strimpel, a native Michigander, is the Co-Artistic Director for B.S. Movement alongside Shaina Branfman. The company has presented its work throughout New York City since in 2012. Bryan is a graduate of Wayne State University with a B.F.A in dance. He has performed and taught around the world in places such as: Colombia, South Korea, Turkey, Tajikistan, and Armenia; as well as throughout New York City. He has danced with Nicholas Leichter Dance, Brian Brooks Moving Company, and David Dorfman Dance. He is a member of The Feath3r Theory and currently performs with ThirdRailProjects. Bryan was an Adjunct Professor of Dance at LIU Brooklyn and he teaches regularly in New York City. He is honored to have been selected as one of Dance Magazine's 'Top 25 to Watch' for 2013.

In class we will research the use of momentum, weight, and successive articulation of our bodies into and out of the floor. We will give value to our differences as catalyst for clarity and deeper understanding of the movement, both physically and theoretically. With a strong emphasis on initiation and release we will work together, through practice and discussion, to build a communal understanding of how the movement is applicable to every body. In the final portion of class we will exercise our responsibility to be perceptive decision makers. We will use our understanding of the movement accumulated throughout class as a vehicle to put into practice our awareness and ability to respond to what is happening around us.


Biography: Shaina Branfman is Co-Artistic Director of BS Movement. Shaina was born and raised in Victoria, Texas and received her BFA in Dance at the University of Iowa. She completed her certification as a Movement Analyst at the Laban Institute of Movement Studies, and completed studies in religion and philosophy at the New York All Faiths Seminary International where she was ordained as an Interfaith Minister. Shaina is a member of The Feath3r Theory and has been performing and sharing her work in NYC since 2014.

Shaina's Movement Philosophy -- In this class we will use improvisation, partnering, floor work and meditation practices to exercise the most efficient and alive versions of ourselves. Through acute specificity and focus we will find freedom and cultivate power inside our body. We will exercise choice and free will, playfully practicing the law of causation. We will understand that dance practice and life practice are one in the same, and how our time in the studio is preparation for the moment we leave.