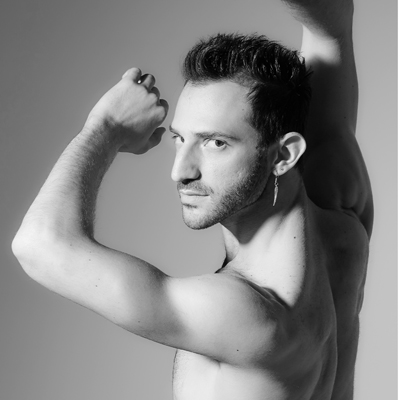 He was born in Baghdad, Iraq, surrounded by the folkloric music and dance of Arab culture. His father, also a dancer and choreographer, was the Artistic Director of the National Iraqi Ballet. Through his father, Fadi was exposed to diverse approaches to dance in Mesopotamia, still present in Assyrian, Syriac, and Bedouin folkloric dances of the Middle East.

When Fadi was thirteen, he moved to Beirut, Lebanon, where he trained in Classical Ballet, Folkloric Dance, and in Modern, Jazz, and Ballroom. Still in his teens, he began experimenting with the eclecticism that has defined his work ever since. By seventeen, he was dancing professionally with the Rahbani Musical Theatre, while studying at the Lebanese Fine Arts University.

In 2005, Fadi joined the Caracalla Dance Theatre, touring the Middle East and North Africa. He moved to the United States in 2009 and performed with Caracalla at the Kennedy Center in Washington, D.C. He was awarded a scholarship to further his ballet and modern dance training with the Alvin Ailey American Dance Theatre in New York City. There he collaborated with distinguished choreographers such as Gary Pierce, Earl Mosley, Elisa Monte, Venti Petrov and Edward Simon. He also toured the U.S. and Latin America with NY2Dance and performed Nejla Yatkin’s Oasis and Wall dance theatre pieces.

Fadi’s multi-cultural background, versatility, and passion for dance allowed him to establish a career in Ballroom as lead instructor, dancer and choreographer at the Arthur Murray Dance Center in New York City. From 2009 – 2013, he placed first in the Top Teacher awards from Arthur Murray International.

Though Fadi had assimilated several dance forms, he was not at home in any of them. In 2014, inspired by a successful collaboration with Sevin Ceviker, he created his own company, where he could continue to refine his distinct, personal style. Every FJK Dance performance reflects his unique mix of experiences, unlike anyone else’s in the current dance scene and still exuberantly evolving. In 2018, Fadi received a CUNY Dance Initiative award and the opportunity to perform the first production of “UnTold” at the John Jay College of Criminal Justice.

Fadi was recently appointed as the first dance “Artist-in-Residence” at Kings County Hospital, Brooklyn, Wellness and Recovery Division, Behavioral Services, “to use dance to remove the stigma of, and to enable the public to better understand psychiatric illness.”

Experiment with Fadi Khoury’s unique approach to movement flow & connections, in contemporary dance, combining different styles and techniques with a cultural influence that encourages our individuality and celebrates our differences. The class includes a center warm up sequence and repertory excerpts to set up the body and mind of the dancer to discover and question one’s own flow in movement.