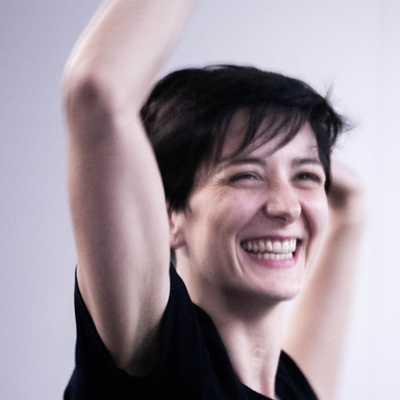 
Elisabetta Minutoli is from Rome Italy and she is a ballet and contemporary dance teacher in NJ and NY , free lance Choreographer and GYROTONC® pre trainer and GYROKINESIS@ trainer.

As a choreographer, she has been commissioned between Europe and the USA for videoclip, film, orchestra, theatre productions, and by many artists. She has screened her work in over 20 festivals both nationally and internationally.

Elisabetta’s work has been seen at Sheen Center, Baruch Performing Arts Center, Steps on Broadway, Martha Graham Theatre, KnJ Theater (Peridance) , Gelsey Kirkland Arts Center, Aaron Davis Hall, City College - New York, Green Space in Queens, Maxxi Museum, Teatro Palladium in Rome among many others. Among the most recent works there are "Mother Warrior" ,a short film created for the Virginia Experimental Film Festival 2021 and the Well Pennies' music video "Stressed Out" filmed during the pandemic in 2020,she is currently working on the duet “As you wish" for Peridance Contemporary Dance Company.

Over the years she has had the pleasure to dance for some American choreographers including Elisa Monte, Molissa Fenley, Anabella Lenzu and Nathan Trice. In Italy she has worked with Luc Bouy, Gloria Pomardi, Marika Vannuzzi, Mvula Sungani, Franco Miseria and Luca Tommassini. She worked also in the musical "The Rocky Horror picture Show", “Datemi tre Caravelle" with Alessandro Preziosi and Niki Nicholai and in the musical "Lady Oscar" by Andrea Palotto.

Minutoli founded and has been the Associate Artistic Director of Vivo Professional Training Center in Rome in 2015, and as an educator for more than 20years, she has been teaching in a lot of institutions, including universities, professional dance studios, companies, festivals, in the USA, Brazil, Bulgaria, Portugal and Italy. She is one of the Artistic advisor board for Idaco Dance Festival in New York She has also been a judge in many competitions in Italy, Croatia and Bulgaria.

In addition floorwork and improvisation technique are introduced. After having prepared the body for a long time, the movement sequence gives each person the possibility of entering into themselves and and to explore movement by taking inspiration from the experiences of everyday life without neglecting the technique and choreographic structure.