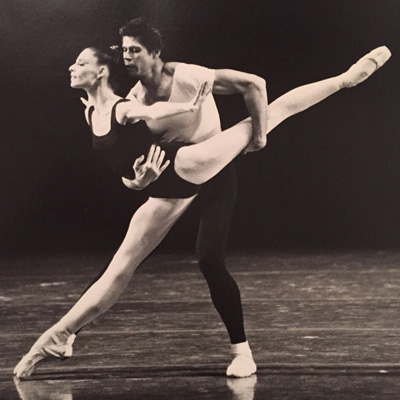 Antonia Franceschi is a Time Out Award Winner for Outstanding Acheivement in Dance. As a young dancer she attended The High School Of Performing Arts for Drama when during her Junior year was selected for the film Grease and shortly thereafter for character Hilary van Dorine in the film ‘Fame’. She was then selected by George Balanchine and was fortunate to dance with Makarova and Company as a soloist, and be partnered by Sir Anthony Dowell in Bach Sonata by Bejart before joining The New York City Ballet. She's had works created for her by George Balanchine, Jerome Robbins, Peter Martins, Lar Lubovitch, Mark Baldwin, Wayne McGregor, Michael Clarke, Karol Armitage, Arlene Phillips, among others. In London, she produced Four Programs of The New York Ballet Stars which performed at The Queen Elizabeth and Royal Festival Halls and and toured to The Harrogate and Sintra Festivals.Antonia has choreographed for both British and American companies, and has recently formed her own Neo-classical company 'AFD Just Dance.' She was a judge on the BBC's Young Dancer competition. Recently she was invited by Boris Charmatz to dance in Musee De La Dance at The Tate Modern and Sophia in Spain. She adores teaching The Royal Ballet Rambert Richard Alston Random DV8 New York Theatre Ballet and Alvin Ailey and Juilliard among many other companies. Antonia created and performed the lead role in the dance play “Up From The Waste” at London’s Soho Theatre to critical acclaim. She is featured in several dance films for British TV including ‘Ponte Blank’,’Frankenstein’, and ‘Ecco’, and The Merchant Ivory Film, ‘The Golden Bowl’. She received a Grant for POP8 for The Lion and Unicorn Theatre where she collaborated with Mark Baldwin Zoe Martlew and Ballet Black, and collaborated with Tal Rosner on the film “There”. She was interviewed for the book Balanchine Then and Now and has been a guest on Woman's Hour Radio 4. Her next ballet Say May Name premiers this April 2017 for Barnard College at The Miller Theater. In October 2016 Antonia received a grant to create a Ballet inspired by the legacy of St Marks Church and chose to collaborate with renown composer, director, writer, Claire Van Kampen for The New York Theater Ballet, she premiered “She Holds Out Her Hand”. It was performed with New York theater Ballet at Live Arts in March 2017.

Antonia's ballet class works in placement, precision, speed, and musicality, passing on knowledge from her brilliant teachers Craske, Balanchine, Maggie Black, Suki Shorer, Stanley Williams, David Howard, Tina Bernal and Julio Horvath and Hilary Cartwright. Her class suits all forms of dance, especially modern, as it is meant to set you up for the day whatever your medium of dance is. Its lines are uncluttered to allow clarity in ones work and free the dancer for any style while keeping them strong and healthy as well as improving.