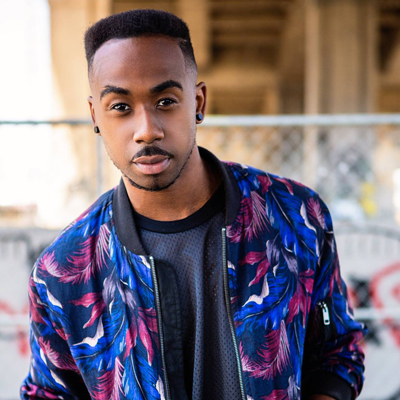 Keenan Cooks was born and raised in Boston , MA and began dancing at the age of 14. Just two years later, he became a member of Boston based Nia Dance Troupe where he first began his professional training. In 2008, Keenan moved to New York City to pursue dance professionally. Since coming to New York City he has had the honor of working with amazing choreographers such as Rhapsody James, Laurie Ann Gibson, Luam, and Danielle Flora. He has had the privilege of working with a diverse list of artist such as Rihanna, Ne-Yo, Flo-Rida, iHeartMemphis, Vietnamese pop-star Vy Phuong, and 3x Grammy winning Colombian artist Fonseca. You may have seen him dancing on America’s Got Talent, Today Show, Good Morning America, MTV Music Video Awards, Man in the Mirror (International Tour) and a preview for the Soul Train Awards in the heart of Time Square. As an up-and- coming choreographer, Keenan has had the privilege to choreograph a BET commercial, and was the Movement Coach/Choreographer for Universal Australia artist Moxiie. Most recently Keenan choreographed Gap’s new commercial for their latest ballet flat, and is the chore- ographer for rapper Cardi B’s “Underestimated Tour”. Keenan has also had the opportunity to teach internationally in Germany, Paris, Argentina and South Afri-ca. And was also recruited as choreographer for MTV pilot "Behind The Brand: Choreographer in Charge". In 2014, Keenan began dancing for Latin superstar Prince Royce on his “Soy El Mismo” World Tour, where he has danced in sold out arena’s in Puerto Rico, Mexico, Chile and more. Through his work with Prince Royce, Keenan has had the opportunity to also dance for Reggaeton artist Wisin and Daddy Yankee. In 2014, he was apart of the Monster’s Of Hip-Hop show “Madness and Mayhem” directed by Nappytabs. You can catch Keenan on Spike TV’s new series “Lip Sync Battle” dancing for John Legend, Queen Latifah, Salt n’ Pepa, and Taraji P. Henson.

Class Description: As a lover of the art of performing, Keenan Cooks' class focuses on enhancing performance quality and dancing beyond the classroom. In each class he pushes students to not only let go and be vulnerable, but to find ways the movement and music relate to situations in their everyday life.Class will start with a warm-up that includes cardio, as well as basic Hip-Hop grooves that can be found throughout Keenan’s choreography. While learning the choreography in class, you will be pushed to incorporate individuality, acting, precision, and musicality. Keenan’s classes are HIGH ENERGY so be ready to sweat!