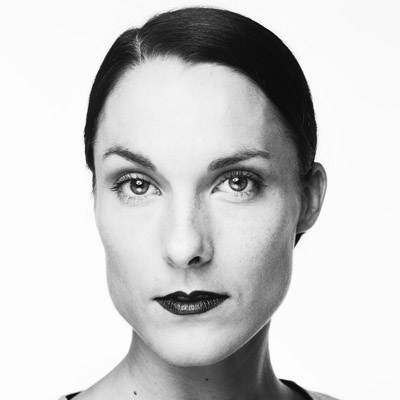 Drew Jacoby was born in Boise, Idaho in 1984. She went on to study at School of American Ballet, San Francisco Ballet and Pacific Northwest Ballet. She began her professional career in 2002 with Lines Ballet in San Francisco, where she was a principal dancer and had numerous original works created on her by award winning choreographer Alonzo King. In 2005 she was invited on Sylvie Guillem‘s Japan tour, where she performed principal roles alongside dancers from the Royal Ballet and Paris Opera Ballet. She won a 2005 Princess Grace Award and in 2006 was voted Dance Magazine’s “It Girl.” In 2007, she moved to New York City to begin her freelance career and market herself independently.

In 2008 she co-founded her independent partnership, “Jacoby & Pronk,” with former Dutch National Ballet dancer Rubinald Pronk. The duo was featured on the August 2009 cover of Dance Magazine an have received acclaim in many leading dance publications. They made a collection of films together with fine art photographer Alvin Booth, entitled “Les Beau est Toujours Bizarre,” which premiered at American Dance Festival’s 2009 Dance on Camera Film Festival. Jacoby and Pronk have guested with Dutch National Ballet and have performed multiple seasons with Morphoses/The Wheeldon Company, as well as engaging in their own projects all over the world. In 2010, Jacoby and Pronk formed a small touring company which was presented at Jacob’s Pillow Dance Festival, Holland Dance Festival, Belgrade Dance Festival, and New Orleans Ballet Association.

Drew danced with Nederlands Dans Theater 1 from 2012- 2015 and joined the Royal Ballet of Flanders as a principal dancer in 2015, where she had one of her career highlights dancing the central figure in Maurice Bejart’s legendary Bolero. She continues to produce and perform at prestigious international galas and founded a media website in 2009 called DancePulp.com (also on Hulu.com in the U.S.), featuring video interviews with high profile dance industry professionals she’s encountered during her travels. In 2016, she collaborated on a video with choreographer Sidi Larbi Cherkaoui and musical/visual artist Woodkid in Paris. She teaches master classes and has co-produced summer programs across the world and has choreographed works on schools and companies and for Youth America Grand Prix contestants, dance films, fashion, and fine art photography.