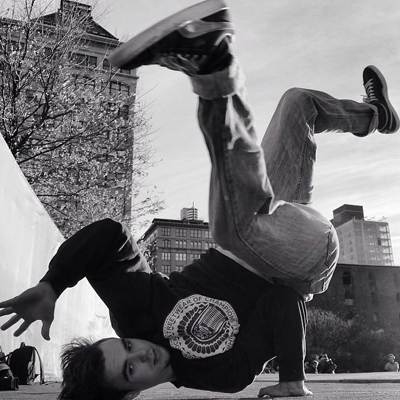 George Povydysh was inspired to dance when he first encountered local b-boys in Brooklyn at the age of 14. After taking the first ever class he knew that this new found interest is something he would want to pursue. It gave him a challenge like no other and he was determined to dive into the culture.

In the years that followed his abilities progressed as his grasp on the dance became stronger. Training at various parks, studios, and practice sessions with other local b- boys. George knows the importance of having true self-expression and freedom with dance.

Currently enrolled in college George is still dancing. Helping the local community and teaming up with the Brooklyn College Ballet club to rent the studio’s for practice sessions and classes for college students. Also a volunteer for NIA he teaches local elementary school children the art of self-expression and free movement. Dedicating his time and energy to spread the truth of hip hop and its roots while spreading positivity through the dance. He still has a lot of knowledge to gain and share and hopes to grow as a dancer as well as inspire and motivate others.