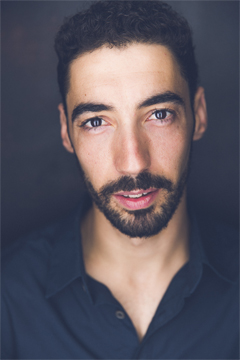 In 1991 at the age of 6 Carlos Neto trained martial arts intensively throughout Europe. During the 90s and early 2000s he achieved recognition at both national and international competitions. In 1998 he joined the cast of a primetime TV series in Portugal, his home country, and had several appearances in the film industry. He moved to the UK in 2004 where he trained as a dancer and also earned his BA and Masters Degree in International Journalism at Cardiff University. In order to further his training, Carlos joined Stella Adler Studio of Acting in NYC where he studied as an actor.

Since 2004, Carlos has danced for the Dutch show BLAZE directed by Anthony Van Laast; played the role of ‘Sudsy’ in West End's hit show Some Like It Hip Hop; portrayed John Travolta’s character in the Nintendo video game Grease, and danced for PS3 Sony Dance Star Party. He was featured in the Bloomingdales 2015 commercial in the USA, choreographed and directed for Warner Brothers, SyCo Music, Sony BMG, Atlantic Records, Britain's Got Talent, Matchbox Twenty, Melanie Martinez, Sergey Lazarev, Brooklyn Nets, Philadelphia 76ers, the Broadway production of Circolombia, The Fringe NYC. He was the creative director of the largest dance competition in the world World Of Dance.

In 2014 NYIT Awards presented him with the honor of "Outstanding Choreography/Movement" for his off- Broadway work which includes choreography for the comedy play Gymnos: A geek’s Tragedy as well as the dance show Alone-Ology

He is a faculty member at the 3 most prestigious dance schools in NYC - Broadway Dance Center, Alvin Ailey and Peridance - and one of the selected expert contributors to Backstage.com.

Currently, Carlos is working between New York City and London both as a choreographer and actor.