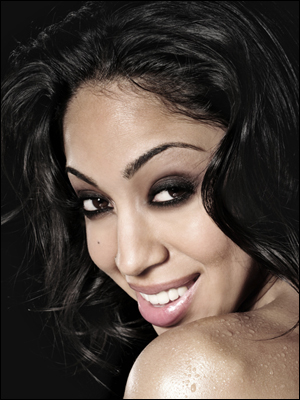 Born and Raised in Hartford, CT, this Latin Beauty of Puerto Rican and Peruvian decent made her way to New York City soon after her 19th birthday. After arriving in NYC, Jessica studied at Alvin Ailey, while at the same time landing a gig as a Knicks City Dancer. This platform, performing in front of 20,000 plus people night after night, molded her into the performer that she is today.

Jessica has been on tour with a variety of different artists from the likes of Foxy Brown, Mariah Carey, Jennifer Lopez, Mary J. Blige, Will Smith to Beyonce. Most recently, Jessica was one of the principle dancers on one of the biggest tours of 2011 with the Black Eyed Peas “The E.N.D tour.” She has also worked with such artists as Rihanna, Sean “Diddy” Combs, Ricky Martin, Shakira and the one and only Janet Jackson.

Jessica’s film credits include Step Up Three, Uptown Girls, Idlewild in which she played Bobbie (the showgirl) and Honey in which she served as Jessica Alba’s dance double as well as a principle dance cast member. Jessica has also appeared in various televised events such as the MTV Music Awards, The Victoria’s Secret Fashion Show, The Grammy’s, Billboard Awards, The BET Awards, Fashion Rocks, VH1 Diva’s Live, The World Music Awards, World Cup 2010 and many more.

She has had the privilege of working with such choreographers and Artistic Directors as Tina Landon, Fatima Robinson, Rich and Tone, A.J., Laurieanne Gibson, Hi Hat, Jamie King, Frank Gatson, Jermaine Brown and Rhapsody.

Jessica loves to share her knowledge of the business with young and up and coming working dancers. She believes that you should never compare yourself with anyone else because no one will ever compare to you. Stay true to who you are. Just leave it on the dance floor with no regrets.

Class Description: For women looking to dance professionally in the commercial industry, it is a MUST, to know how to dance in heels. Class will begin with a basic warm up that is done barefoot. This will allow you to get a sense of your alignment. Jessica focuses on preparing woman not to be afraid of there femininity and the strength that comes with that. She wants her students to push themselves to be better dancers, performers and to have the courage to know who they are as ARTIST!
Please no sweatpants!!