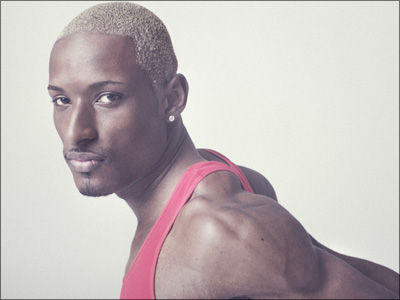 Dashaun has been of the Ballroom scene for the last 10 years honing his unique vogue dance style. His dedication, talent, and ambition have landed Dashaun in international commercials for Coca Cola and inspired the creation of the Hip Hop dance “The 5000,” making him an internet and media sensation.

August 2009 marked Vogue’s return to mainstream attention when Dashaun competed on the fourth season of MTV’s America’s Best Dance Crew as 1/5 of the dance group Vogue Evolution. The crew’s showcase of different elements of the vogue scene, including catwalk, duck walk, spin, dip, and hands, alongside popular urban dance moves took them to the top five on ABDC. They’ve brought a refreshing new form of dance to those not familiar with the ballroom scene and their mark has been made around the world.

When Dashaun is not voguing, he acts, models, and travels the country as a ballroom commentator. As a model he has worked with the likes of Metro dot Pop Magazine, Clik Magazine, B66 underwear, ZuluRose, and Triple Fat Goose.

Dashaun is also a passionate advocate of HIV/AIDS awareness. He’s worked as an HIV tester, counselor, and youth support facilitator.