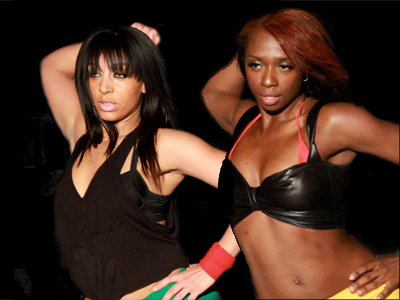 Tavia and Tamara have been working in the entertainment industry for several years. They have had the opportunity to work with artists such as Rihanna, Beyonce, Missy Elliot, Diddy, Whitney Houston,Lady Gaga, Alicia Keys, Jennifer Lopez, and many more. They have also toured over 80 countries with platinum artist Sean Paul. You have seen them in all of his major music videos including We Be Burnin, Temperature, Like Glue, Everblazin, Press It Up and Give It Up To Me. Tavia and Tamara have been teaching dance classes throughout the world and at conventions such as The Pulse and Monsters Of Hip Hop.

Tamara Marrow was born and raised in Long Island New York. Her mother put her in dance at the young age of 4, and almost immediately knew this is what she loved. Her career began when she started choreographing and dancing for thousands of fans of the New York Knicks at Madison Square as a Knicks City Dancer. Tamara has done several music videos, international and national tours, award shows, and feature films. She has danced with artist such as Missy Elliot, P Diddy, Toni Braxton, Whitney Houston, Tweet, Ludacris, Pharell and Gwen Stephani just to name a few.

Autavia Bailey started dancing at a young age but decided to pursue a professional career when she moved to New York. There she studied street jazz, hip-hop, jazz, ballet, house and many other styles of dance. Soon after she began going to auditions where she landed the opportunity to perform with artists such as Jennifer Lopez, Alicia Keys, Beyonce, Lady Gaga, Eve, Missy Elliot and many others. Along with performing, touring and music videos, Autavia has also been cast in numerous movies and commercials including Idlewild, Step up 3, Coca-Cola, Burger King and many more.