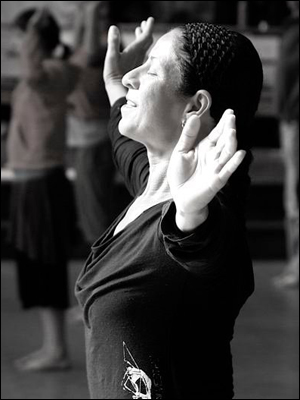 Choreographer, instructor, dancer and creator of the Silvestre Dance Technique, Rosangela is a native of Salvador, Bahia, Brazil, where she graduated with a Bachelor's Degree in Dance and post-graduated specializing in choreography, achieving her degree from the Federal University of Bahia (UFBA). She has researched dance and music in Brazil, India, Egypt, Senegal and Cuba as part of her ever-evolving and eclectic palette of movement. She acquired training in such diverse techniques as: Martha Graham, Limón, Horton, Floor Barre, Classic Ballet, Dunham Technique, and has experienced diverse dance expressions - such as Germany Theater Dance, Contemporary, Folkloric, as well as Traditional dances of Africa and other continents. Her instructors include Raimundo Bispo dos Santos (Mestre King), Mercedes Baptista, Clayde Morgan, Carlos Moraes, Nelma Seixas, among others, beginning in the late 1970s. Since 1981, Ms. Silvestre started to travel in and out of Brazil to teach, to train dancers, to perform, to lecture and to demonstrate, to consult, and attended seminars and residencies in diverse universities, dance festivals such as: Colorado College Dance Festival, New Orleans Dance Festival, and dance camps such as the California Brazil Camp each year. She choreographed numerous dance pieces for companies based in Brazil - Balé Folclórico da Bahia and Odunde - as well as Cleo Parker Robinson Dance Company, Ballet Hispanico Repertory Company, American Academy of Ballet, Roots of Brazil, Dance Brazil, Viver Brasil, Muntu Dance Theater, and the Kendra Kimbrough Dance Company. Her dance investigation and constant development created an opportunity to connect with the eclectic American musician Steve Coleman, with whom she traveled to diverse countries which have African roots in their music and dance. With Steve Coleman, Rosangela developed an idea to have the body as an instrument that provides the movement-form of any sound that can be captured - thereby discovering and creating dance at any moment. Rosangela is currently the choreographer of Viver Brasil Dance Company Directed by Linda Yudin and Luiz Badaró.

Rosangela's use of her voice is an integral part of her work in dance. In September 2011 she completed the CD: "Voices of Nature" recorded and produced by Mike Zecchino at The Nail Recording Studio in Tucson, Arizona. Visit CD BABY to listen and purchase.