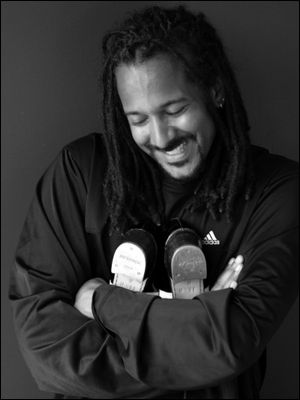 A native of Manchester, New Hampshire, Aaron Tolson continues to make his mark by championing the movement of the art form of Tap in several arenas. Mr. Tolson is a national spokesperson for dance wear company SoDanca, a consultant and writer for Dance Spirit Magazine, former professor of dance at Plymouth State University and the Boston Conservatory, as well as the assistant choreographer, co-creator and assistant producer of the acclaimed stage production Imagine Tap!

Aaron started dancing at the age of ten in Lawrence, Massachusetts. Four years into his dance career he was performing in the Great Tap Reunion at the Apollo Theatre. He attended St. John's University obtaining a Bachelor of Science degree in Communications all the while honing his tap technique in Manhattan. His senior year of college landed him in the New York Shakespeare Festival tap program, also known as Funk U! Soon Aaron became a company member of Manhattan Tap and worked with the show Tap Dogs. Jumping feet first into choreography, he landed a job with Absolut with a tour called Absolut Tap!

In 2005, Aaron completed a six-year run with Riverdance, the internationally acclaimed show with performances on Broadway and Radio City Music Hall where he was a featured soloist and dance captain. Since then, Aaron has performed and taught at numerous tap festivals, in addition to performing with Brookline Chorus’ Duke Ellington Sacred Concert, The Late Late Show with Liam O’Conner in Ireland and on Globo TV representing the Brazil International Tap Festival.

Intro: Has never put on tap shoes before and is ready to explore a new style of dance.
Beginner: Knows the basic steps and wants to grow and have fun!
Adv Beginner: Has tapped before, knows basic steps and ready to have fun exploring new rhythms.
Intermediate: Looking for a challenge, to have fun, and not to be overwhelmed.
Broadway Tap:Learn time steps and exercises to help you grow in your desired style of tap.