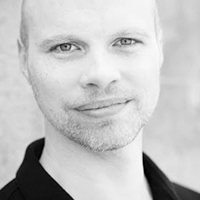 Jonathan Riedel is the choreographer and Artistic Director of Riedel Dance Theater, founded in 2003. He has created works for the Limón Dance Company, the Purchase Dance Company, the Yard, Dance New York International, the Good Moves Consort, Agnes Scott College; and developed choreography and character movement for the video game, Godessia, produced by Artware. DanceView Times proclaimed his work “brilliant," "profoundly moving," and having "an ingenuity and timing that would make Petipa jealous." His work has been performed at the Kennedy Center, the World Trade Center Plaza, The Egg, FringeNYC, the Downtown Dance Festival, and DanceNOW NYC. His solo The Angel was integrated into AHRC’s curriculum of dance for students with autism. A native of Rye, NY, he began dancing at the age of 17 and graduated Magna Cum Laude from the Conservatory of Dance at Purchase College. He prospered in a career with the Limón Dance Company from 1996 to 2006, performing works by Doris Humphrey, Antony Tudor, Donald McKayle, Murray Louis, Jirí Kylián, Lar Lubovitch, and Doug Varone. He danced many of José Limón's masterpieces including Chaconne, Orfeo, Psalm, There is a Time, and The Moor's Pavane. Tobi Tobias of ArtsJournal declared him to be "surely one of the most fascinating dancers the company has harbored." He recently earned an MFA in choreography at Purchase College.