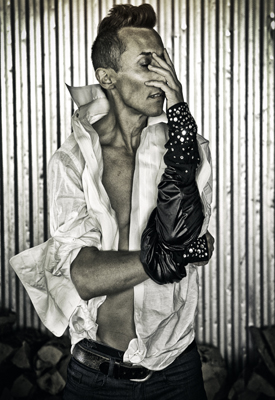 "Wes Veldink and his dancers move with a fierce, sexy quality that wreaks of passion, lust and rage. The refreshing honesty of their movement takes the audience on an emotional journey through the valleys of their own desire." Sara Jarrett, editor-in- chief Dance Spirit Magazine .

Director and choreographer, Wes Veldink, began developing his unique and dynamic style of dance over two decades ago. Based in the fundamentals of jazz, ballet, and modern, his work transforms human posture and gesture into movement that brings the intricacies of music to visual life and transcends the boundaries between commercial and concert dance.

After opening a dance studio at age 16 in his hometown, Wes began his career in Los Angeles following his graduation from the prestigious Orange County High School of the Arts. While in L.A., Wes taught at the EDGE Performing Arts Center, co- choreographed Paula Abdul’s video Blowing Kisses in the Wind, was Michael Jackson’s dance double in two videos, improvised live onstage with singer/songwriter Ani Difranco, and danced in the Disney film Newsies.

After moving to New York City, Wes started his own professional dance company, The Wes Veldink Movement, which toured Los Angeles, Toronto and South Korea. Wes has been invited to both teach and choreograph for the Oslo State Ballet School/Oslo Dance Ensemble (Norway), the Osaka School of Music and K- Broadway (Japan), the Mediterraneo Dance Festival and World Dance Movement (Italy), Studio Harmonic (France), Amsterdam Dance Center (Holland), and the Nadine Bommer Academy (Israel), as well as universities, conservatories, and conventions throughout the U.S. and Canada.

Recently, Wes has choreographed a series of commercials for Joe Fresh, an international campaign for Nikon with Kate Moss, and a Revlon campaign with Olivia Wilde. In music, Wes was a contributing choreographer for Alicia Keys' Set the World on Fire Tour and was the Director/Choreographer for Ashlyne Huff's 30- city Heart of Gold Promotional Tour.

Additionally, Wes choreographed and set the dance sequences for Gwyneth Paltrow and Leighton Meester in the feature film Country Strong. Through his own production company, "Calm & Sense Creations," he has conceived, directed, and choreographed two dance short films: Full Circle (filmed in the Redwood National Forest) and Untitled (filmed in Tropea, Italy).