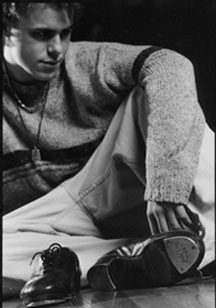 James Sutherland has taught tap since the age of fifteen. He could have been seen last in William Johnson’s production of “From Hoofin’ 2 Hittin’,” a theatrical performance that gives light to the worlds of steppin, bucket drumming, and hoofing. Also, James has toured with Tee and Jam, Inc., “Tap Dogs,” and appeared alongside Michael Minery in a duet impersonating the Nicholas Brothers at the Supper Club in Times Square. James credits his training and inspiration to Cathy DeFrances and Henry LeTang. He appears regularly around New York in select venues and is currently still promoting “From Hoofin’ 2 Hittin’.”