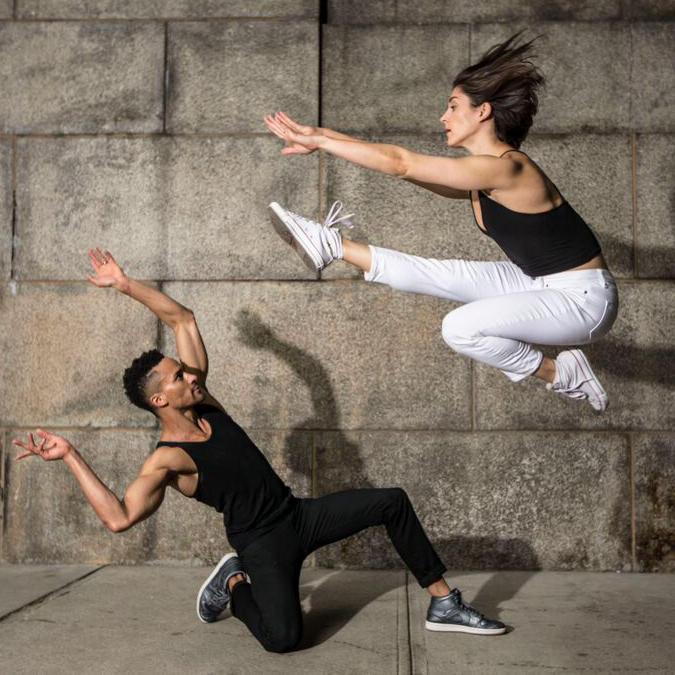 Christopher and Lauren met while auditioning for Pilobolus Dance Theater in 2007! They toured the world together for almost eight years with the company and have been happily married since 2014. Over the years, with inspiration from Pilobolus Dance Theater, Alison Chase and multiple immersive theater shows, they began to form their own beliefs and ideas on partnering, dance making and story telling. For Lauren and Chris, partnering is a shared experience between all bodies involved. It blurs the lines between who’s leading whom and is a true conversation between the couple and/or group. It is unlike most traditional partnering, having the man lead and showcasing the woman. The dancers must develop a mutual nonverbal language through movement, sensitivity, trust and play. When all aligns, magic happens.


Christopher Grant originally from Mississippi, presently lives in New York City. He received his B.F.A from the University of Southern Mississippi in Dance Performance and Choreography. Upon graduating he moved to New York City to train at Broadway Dance Center. Shortly after, he joined Pilobolus Dance Theater where he performed classic repertoire, was one of the original collaborators of the hit show, Shadowland, and made multiple international and national TV appearances including, The Conan O’Brien Show and The Royal Variety Show for the Queen of England. Christopher has been fortunate to have performed works by noted choreographers including, Ryan Heffington, Denna Thomsen, Luam, The Kuperman Brothers, Alison Chase, Lorin Latarro and Jermaine Browne. Christopher’s most recent credits include the immersive theater shows Queen of the Night and Seeing you. He has also had the pleasure of performing in Changers, A Dance Story, written and directed by Spike Jonze. Christopher teaches throughout the country with his wife and partner in all things, Lauren Yalango- Grant. Their choreography and classes are based around the nature of play and how it relates to story telling through movement and partnering. They have most recently been seen in the Apple holiday commercial, ‘Sway,’ and both are currently rehearsing for the soon-to-be Broadway musical, King Kong.

Lauren received her BFA from NYU’s Tisch School of the Arts. She was a member of Pilobolus Dance Theater from 2008-2015. Lauren was a collaborator & original dancer in Pilobolus’ hit, Shadowland, where she lead the show as principal dancer. She has performed both on stage & screen for people such as Conan O’Brien & the Queen of England. Lauren has performed works by noted choreographers including Jennifer Jancuska, Bill T. Jones, Alison Chase, Stephen Petronio, Jermaine Browne, Denna Thomsen and Ryan Heffington. Other credits include: Fuerza Bruta Wayra, Queen of the Night, The Bad Years, Seeing You and Changers, A Dance Story by legend director, Spike Jonze. Lauren teaches dance, partnering and yoga throughout NYC and around the country. As a choreographer Lauren works with her creative & life partner, Christopher Grant, to create stories through play & true partnership. They most recently have been seen together in Apple’s latest holiday commercial, ‘Sway,’ and are currently rehearsing for the soon-to-be Broadway show, King Kong.