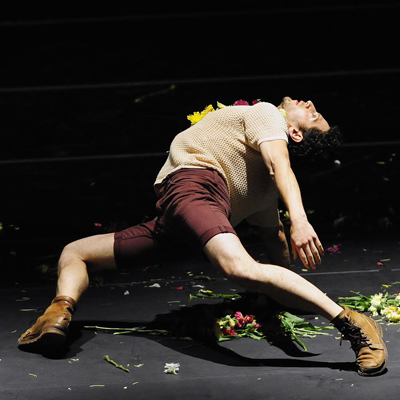 Jesse Zaritt is a Brooklyn, NY based dance artist. He is the inaugural 2014-2016 Research Fellow in the School of Dance at the University of the Arts in Philadelphia, PA. He has been working collaboratively with choreographer Jumatatu Poe since winter 2012; they recently presented an evening length duet at Gibney Dance Center in New York City. Their work has also been shown at AUX Performance Space (Vox Populi) and Fringe Arts in Philadelphia (PA) and at the Baryshnikov Arts Center (through the sponsorship of Triple Canopy), Dixon Place and New York Live Arts (through the Studio Series Program) in New York City. A duet created in collaboration with choreographer Katie Swords premiered at the Museum of Art and Design in New York City in Late October 2015. Jesse was recently commissioned by the American Dance Festival to create a duet with choreographer Mark Haim which premiered as part of the 2015 ADF performance season. Jesse has performed his solo work in Russia, Korea, Germany, New York, Japan, Mexico and Israel. His solo ‘Binding’ is the recipient of three 2010 New York Innovative Theater Awards: Outstanding Choreography, Outstanding Solo Performance, and Outstanding Performance Art Production. From September 2008 through June 2011, Jesse was an artist in residence at the 14th Street Y in Manhattan as part of LABA, a laboratory for new Jewish culture. He has been commissioned to create original choreographic works for numerous American college programs; he has also created choreography for the Seminar HaKibbutzim College (Israel) and the Acco Theater Festival (Israel). Jesse was the recipient of a 2006-2007 Dorot Fellowship in Israel which enabled him to study the relationship between political conflict and choreography. Jesse was a performer with the Shen Wei Dance Arts Company (NYC/2001-2006), and the Inbal Pinto Dance Company (Tel Aviv/2008). Jesse has also performed in the work of Faye Driscoll (NYC/2010-2015) and Netta Yerushalmy (NYC/2009-2012). Jesse has recently taught at The University of the Arts (PA), Bard College (NY), the American Dance Festival (NC), Hollins University (VA), Pomona College (CA), and the University of the Americas Puebla (Mexico) as well as at festivals in Japan, Korea, and Russia. Jesse received an MFA in Dance from Hollins University/The American Dance Festival (2008) and a BA from Pomona College (2000).

Each class begins with practices that help to release tension, fixed habits and perceptual/intellectual rigidity. Improvisational and choreographed exercises help to reveal openness, clarity, and length in our bodies. Phrase work will then allow us to research ways to exaggerate the sensations of being in a weighted body. We'll fall into and out of lush, decadent dance experiences.