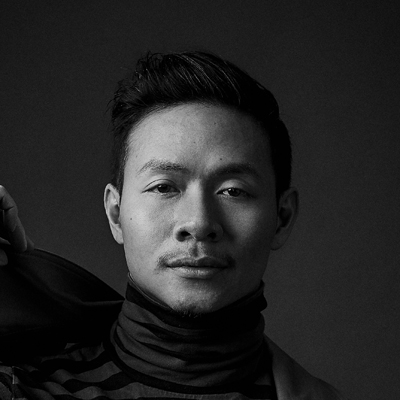 Vivake Khamsingsavath (Vive) is a Laotian American dancer and choreographer from Brooklyn, New York. He studied dance at Binghamton University, where he also earned his Bachelor of Arts degree in English. Vive has toured Europe performing with modern company Galumpha, taught workshops in Asia and South America, and worked in Los Angeles California. In 2012, Vive decided to focus his work in New York City where he has performed at notable venues including Lincoln Center, Radio City Music Hall, Carnegie Hall, Broadway at Bryant Park, Battery Park, and Mercedes Benz Fashion Week. Vive has appeared on the Today Show, The View and Good Morning America. He has been a featured artist for The Huffington Post, campaigns for The W Hotels, VISA, Nintendo and Sears. Vive served as choreographer for The US Open, Bravo TV, Bloomingdales, PUMAxMaybelline, NARS Cosmetics, TNT’s “I Am The Night”. Currently, Vive dances for VIVO Ballet and Yu.S.Artistry. Vive is director at Dance United, an arts organization which provides cultural dance workshops to underserved public school across NYC. He runs Viveforlove, his mission is to create and provide dance jobs to artists in the community. Vive aspires to share his passion for dance and give students valuable insight and tools to become more knowledgable dancers and performers.

Vive’s class focuses on breath and flow. His warm up is a series of movement exercises which transitions from one to the next creating a sense of circularity and continuity. He is interested in exploring movement quality, understanding alignment and traditional technique, and finding ways to deconstruct and play with traditional concepts. He plays with different textures in the body allowing the dancer to find individual freedom to express themselves through his dynamic movement.