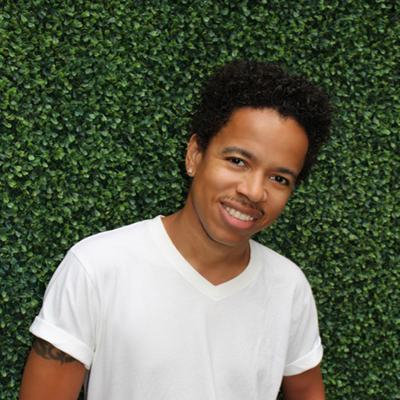 Yes, his name is Q and it has nothing to do with Star Trek or James Bond characters. Q completed another stint as a choreographer on the second season of the Lifetime network series Abby’s Ultimate Dance Competition and performed in a project helmed by show judge Richy Jackson (Lady Gaga, Katy Perry). His choreography has also been featured on The Anderson Cooper Show, in the online marketing campaign for Step Up 3D and additional choreographer/dancer credits include: various projects for MTV, VH1, Oprah Winfrey’s OWN Network, The NatGeo Channel, Billboard magazine as well as recording artist Kelis and MuchMusic Canada’s MuchOnDemand video countdown show. Additionally, he worked with independent artist Jonté on his debut Japanese DVD release Hello Jonté Moaning and recently created content for his live performances in Ibiza and for cosmetics giant Kiehl’s.

Having graduated from Baltimore School for The Arts as a theater major who was influenced by varying disciplines, Q creates choreography, both onstage and in class, that connects the dots between the music, the movement and the message. To hear him tell it, as he often does while working with dancers, “Anyone can dance, but not everyone can perform.” After moving to New York, his dance class regimen included a steady diet of Hip Hop, Funk, Ballet, and Jazz. The roles are reversed nowadays and though he still considers himself a student, Q can be found teaching in places as far away as Japan and South Africa and a bit closer in NYC as part of the faculty at Broadway Dance Center, a guest teacher at Peridance, The Ailey Extension and a Street Jazz/Hip Hop instructor at Crunch Gyms NYC.

He is often asked, “Q, how would you describe your class?” and while his choreography is rooted in street jazz and hip hop, it is stylistically determined by the music he chooses. Frequently and without warning, your class experience could easily incorporate the worlds of Hip Hop, Pop, Reggaeton, Dancehall, Rock and K-Pop with Q drawing creative inspiration from Chris Brown, Wisin & Yandel, Jay-Z, Katy Perry, Korean rapper CL, Swedish dance artist Robyn and so many other artists who fall outside of even those boundaries. You may not always know what you’re getting with Q’s choreography, but it’s that variety that keeps you, the dancer, literally on your toes and the class so fresh and most definitely so clean! For more info on Q, be sure to check out his website at qsnews