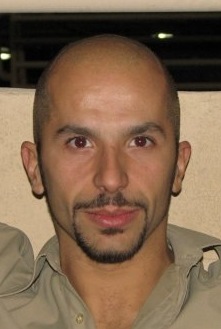 Giulio originates from Rome, Italy. He studied ballet and modern dance in his home town before getting a scholarship in Lausanne at Maurice Bejart École-Atelier . He then received scholarships at both the David Howard Dance Center and at the Alvin Ailey Studios, both in New York.

Giulio danced with Maurice Bejart’s Youth Company and participated in workshops with the Martha Graham company and the Pina Bausch company under the supervision of Malou Airaudo. He was also a soloist at the TAN National Ballet in Italy and performed the role of the Prince in Albano' s Ballet "Nutcracker" in Conneticut USA. The last 15 years have seen Giulio perform musical theatre; he was namely principal dancer/singer in the original European cast of Fosse, under the direction of Anne Reinking; in the original West End production of Notre Dame de Paris (also Dance Captain), under the direction of Gilles Maheu; and with Trevor Nunn in Cats, Starlight Express and Joseph And The Amazing Technicolor Dreamcoat. He was also a solo dancer and singer in the Hit Musical Dance of the Vampires, directed by Roman Polanski, as well as playing Cesar in the German Original Cast of Saturday Night Fever, Original Italian Cast of Promises, Promises and played the role of Freddy Mercury in the German Musical Tribute We Are The Champions.

He has worked as Director and Choreographer for the V.I.B.E. Performing Arts Centre in Las Vegas (with original productions such as Glow and Fossiana) and Rag Tag Entertainment (with Musical Productions of Jekyll & Hyde, The Who’s "Tommy" and the Bob Fosse tribute "Take Off With Us" ). Giulio directed and choreographed a new multidisciplinary show which opened in Cipriani's new dinner theatre "Teatro Bellini" in downtown Ibiza. The show is called "The Night Sun" . Giulio was also Guest Choreographer at the SYTYCD Las Vegas Convention with an original Dance/Acrobatic piece called: "Sacred Heart". Giulio just finished working on a new project for the PACHA Group in Ibiza. He was the Creative Director and Lead Choreographer for the new show which opened at the luxurious Destino Resort this summer. Giulio also worked for Cirque du Soleil as the Former Artistic Specialist and Casting Advisor for all resident shows in the USA and Asia. He also created, directed and choreographed a short dance film (Liquid Sunshine) for a Cirque du Soleil charitable event organized for the One Drop Organization. Giulio is currently the Resident Choreographer and Artistic Coach for the "Shine Alternative Fitness" centre in Las Vegas. Currently he also coaches Cirque du Soleil and professional artists on the Las Vegas strip while creating new acts.

He led a series of workshop in NYC with prestigious academies such as Gelsey Kirkland and the Alvin Ailey professional division where he worked with the graduates. Giulio is also councilman for the F.I.D. (Italian dance Federation) and his choreographies have won various international awards.

The workshop will feature dance, improvisation, acting and team building exercises aiming to inspire the dancer's artistry by challenging also the technique. Giulio Scatola will be opening his own dance show spectacular in Las Vegas end of 2014. At the end of the workshop dancers will be chosen to attend directly the NYC call back sessions in May for such project.