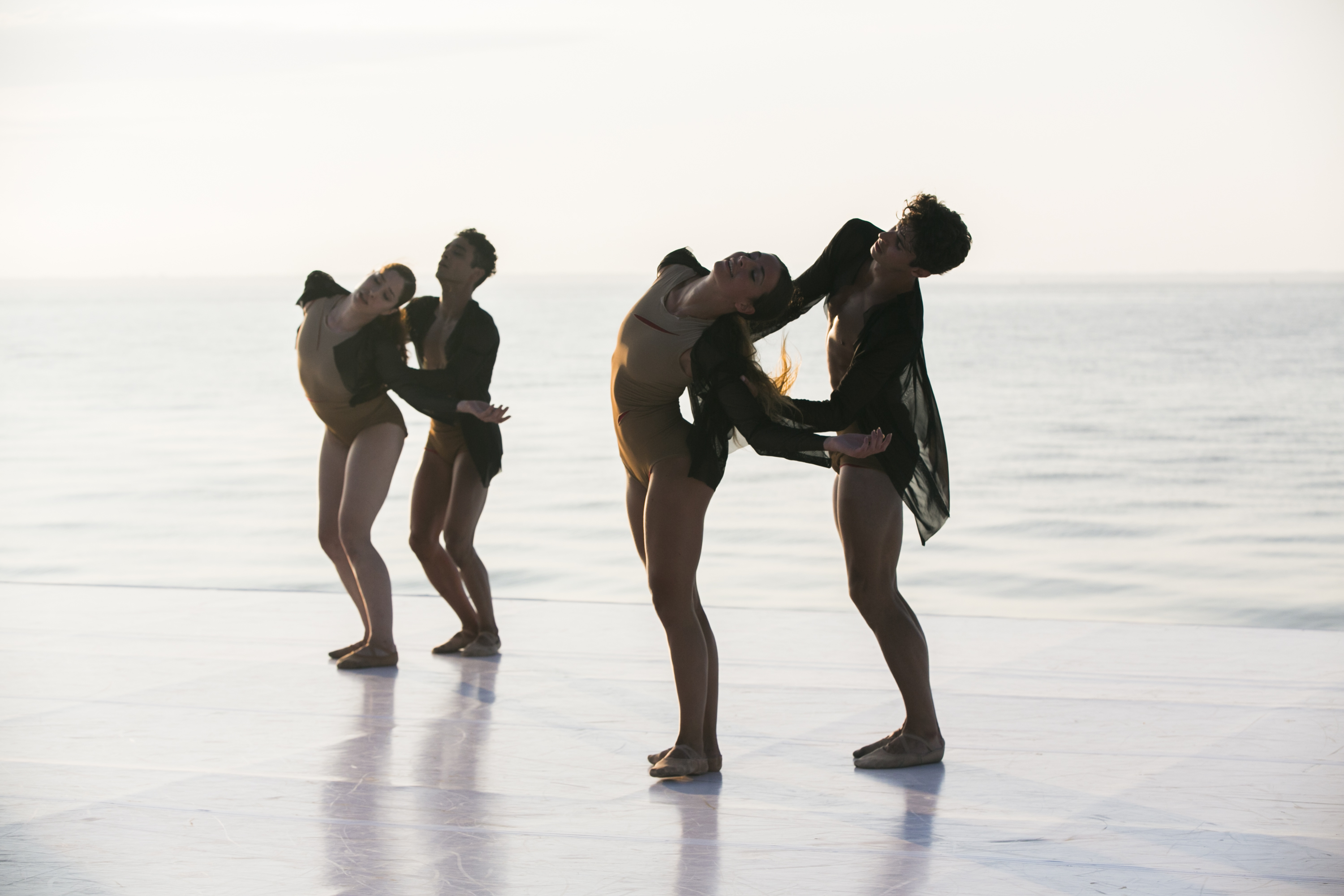 Alexandre Barranco was born in Brazil. In 2001, at the age of 11, he began his dance studies at ABAMBA (Benefactors and Friends of Dancers and Actors Boys Association). In 2008, he had his first professional experience in the "Ballet of the City of Taubate," mainly working with contemporary dance. In 2010, he worked with the "Young Dance Company of Sao Jose dos Campos". He has performed within Brazil and abroad dancing classical ballet and contemporary dance and has been awarded with many national and international prizes in competitions. In 2016, Alexandre started graduated in New York at Peridance Capezio Center in their certificate program with a full scholarship while simultaneously apprenticing with the Peridance Contemporary Dance Company.

Katie grew up in Norwich, Vermont where she started her dance training at a local studio under the direction of Doreen Keith. She spent her summers studying at Ballet Austin, ABT Austin, and Kaatsbaan. Katie attended Butler University's Jordan School of the Arts where she continued her training and received her BS in Dance Arts Administration. While at Butler, she performed works by George Balanchine, Paul Taylor and Gustavo Ramirez Sansano. In Fall 2014, she performed in Aspen Santa Fe Ballet's Nutcracker as a guest dancer, under the direction of Tom Mossbrucker. Katie has performed PCDC works by Dwight Rhoden, Norbert de la Cruz II, Jae Man Joo, Charlotta Öfverholm and Igal Perry across New York City and on tour regionally. In 2017, Katie had the privilege of representing Peridance Contemporary Dance Company in Argentina while performing in the VII Gala Internacional de Ballet de Buenos Aires. Katie is excited to be starting her fourth season with the company.

Originally from Italy, Matteo started his dance training in Modena at the age of thirteen. He has won many competitions and received acknowledgments for his dancing. In 2012 he joined the local company MdDanza under the coordination of Veronica Sassi. At the age of eighteen, choreographer Enzo Celli invited him to join the Botega Company for the production of Giselle. During the summer of 2015 he took part in the prestigious iBStage-International summer program. In September 2016, he joined the Certificate Program at Peridance Capezio Center and became a company apprentice in January 2017.

Originally from Hollidaysburg, PA, Colin Heininger graduated in 2016 as an Honors Scholar with a BFA in Dance and a minor in Musical Theater from the University of the Arts in Philadelphia, where he was named the Valedictorian of the School of Dance. There, he had the privilege of performing works by Sharon Eyal, Netta Yerushalmy, Andrea Miller, Helen Simoneau, Beth Gill, Sidra Bell, and Douglas Becker, among others. In addition, Colin attended the Jacob's Pillow Contemporary program in 2014 and Springboard Danse Montreal in 2016, where he was first connected to Igal Perry and Peridance Contemporary Dance Company. Colin is very excited to be joining PCDC for his third season.

So-hye Kim is from Korea and started her dance training at the age 10. After graduating from Korea National University of the Arts, she started her professional career. She is currently in the Certificate Program at the Peridance Capezio Center, and began apprenticing with Peridance Contemporary Dance Company in Fall 2016 before being promoted to company dancer in Fall 2018.

Zachary Kukla was born in Laporte Indiana. He received his BFA from Butler University's Jordan School of the Arts in 2014. Upon graduation, he was a guest artist with Dance Kaleidescope, under the direction of David Hochoy. After moving to New York, he became a member of Ballet Hispanico Dos, under the direction of Eduardo Villaro. Throughout his career, he has performed works by choreographers such as Gustavo Ramirez Sansano, William Whitener, Pedro Ruiz, Susan McGuire, Alejandro Cervera, Igal Perry, Jae Man Joo, and Marlena Wolf. This is his fourth year with Peridance Contemporary Dance Company.

Billi Marder is originally from Los Angeles, CA. She began her dance training with Reagan Hoeft and then continued at Cuizon Ballet Centre, where she was under the guidance of Lisa Cuizon and Melissa Jackson [MJ] and had the opportunity to work with choreographers Peter Chu and Sonya Tayeh. Billi graduated in May 2017 from The University of Oklahoma School of Dance, under the Direction of Mary-Margaret Holt and Austin Hartel, with a BFA in Modern Dance Performance and With Distinctiction. While at OU, she spent winters and summers studying at Alonzo King Lines Ballet, Hubbard Street Dance Chicago, Ballet Hispanico, and Centre de Dansa de Catalunya in Barcelona, Spain, as well as on scholarship at Alvin Ailey American Dance Theater and the Contemporary Program at The School at Jacobâ€™s Pillow. Billi has performed work by renowned choreographers such as Alvin Ailey, Igal Perry, Jessica Lang, Norbert de la Cruz III, Annabelle Lopez Ochoa, Kevin Iega Jeff, Thang Dao and Yesid Lopez. She is thrilled and honored to return to Peridance Contemporary Dance Company for her second season.

Hannah is from Pittsburgh, Pennsylvania and trained at Pittsburgh Ballet Theatre School. She graduated from the Ailey/Fordham BFA program in May 2016 with a double major in Dance and English. During her time at The Ailey School, she had the pleasure of working with choreographers such as Matthew Rushing, Jae Man Joo, Francesca Harper, Christopher Huggins, Taryn Kaschock Russell, and Hope Boykin. She has performed professionally with Gibney Dance, Arch Contemporary Ballet, and Texture Contemporary Ballet, and attended Springboard Danse Montreal in June 2017. Hannah works administratively for Shining Light Ministries, an organization that takes artists into correctional facilities to bring hope to incarcerated men and women through performing arts workshops. She is also the Administrative Assistant for PCDC. Hannah is thrilled to begin her third season with the company.

Joslin Vezeau is from St. Louis, Missouri and is from the B.F.A in dance program at The Ailey School/Fordham University in 2018. In St. Louis, she studied dance at the Center of Creative Arts (COCA). While at The Ailey School, Joslin was the recipient of the Denise Jefferson Memorial Scholarship in 2016. She has also worked with and performed works by Matthew Rushing, Jae Man Joo, Marguerite Donlon, Darshan Bhuller, Marcus Jarrell Willis, and Camille A. Brown, among others. Joslin attended the Jacob's Pillow Contemporary Program in the summer of 2017, and has danced at the Ailey Spirit Gala in Lincoln Center. She has also participated in summer intensives at Hubbard Street Dance Chicago, Parsons Dance, Paul Taylor Dance, and Alonzo King LINES Ballet. This is her second year with Peridance Contemporary Dance Company.

Originally from Italy, Greta began her dance studies in Treviso. She has won numerous awards for her dancing at competitions around the world. At the age of 14, she won a scholarship to move to Florence and start a two-year Certificate Program. In 2014, Greta participated in the San Francisco Ballet summer program, where she had the chance to work with choreographers such as Johan Inger. In September 2014, she started the two-year Certificate Program at the Peridance Capezio Center, where she worked with esteemed choreographers and master teachers such as Igal Perry, Milton Myers, and Manuel Vignoulle. Greta joins the company this year for her fourth season.

Jesse Barnett was born and raised in Yorktown, Virginia where he trained in multiple forms of dance with various instructors in the Tidewater area. Jesse moved to NYC in the Fall of 2013 to complete his BFA in Dance at Marymount Manhattan College, under the direction of Katie Langan. While at Marymount, he performed works by Doug Verone, May O'Donnell, Murray Louis, David Parker, Larry Keigwin, and Robert Battle. Jesse has since enjoyed performing as a freelance dancer for groups including Becky Radway Dance Projects and caitlin+dancers, in addition to becoming a certified Pilates instructor through the Kane School. He is thrilled to join PCDC as an apprentice for their upcoming season.

Cailey Bruno, from Toms River, NJ, began dancing at the age of three. She has attended summer intensive programs at the Harid Conservatory, the Eglevsky Ballet, and the American Repertory Ballet. Coached by Jennifer James Church, she has been a successful candidate of the Royal Academy of Dance's examinations. She also trained at Dance Mixx Studio under the guidance of Jolene Baldini. Cailey studied all genres of dance at Peridance Capezio Dance Center in NYC, earning a certificate in Ballet and Contemporary in June 2016. During her training program, she performed works by Milton Meyers, Charlotta Overhölm, Cindy Salgado, and many others, including Igal Perry. Currently, Cailey teaches at studios in New Jersey and New York where she hopes to inspire and educate kids in the industry. Cailey looks forward to furthering her career in dance no matter what she is doing or where she is and is excited to be an apprentice for Peridance Contemporary Dance Company.

Casey Hess, from Portland, Oregon, graduated from The Juilliard School in 2017 with a BFA in Dance, where he was awarded the Martha Hill Prize for Outstanding Achievement in Dance and Leadership. Hess has had the opportunity to work with Zvi Gotheiner, Alex Ketley, Loni Landon, Takehiro Ueyama, Tom Weinberger, and Christopher Williams. Hess has performed notable works from Merce Cunningham, Jiri Kylian, Fernando Melo, Ohad Naharin, and Agnes de Mille. This is his first year apprenticing with Peridance Contemporary Dance Company.

Sasha began dancing at Canadian Children's Dance Theatre. After recognizing her passion for ballet, Sasha auditioned successfully for Canada's National Ballet School. In 2010, she joined The School of Cadence Ballet's professional training program and Cadence Youth Ballet where she had the opportunity to perform lead roles in the school's productions, such as Swan Lake, and was selected to perform with the professional company at the international festival "Dance: Made in/Fait au Canada." During her time at Cadence, Sasha also competed at the Youth American Grand Prix international ballet competition, receiving top placements in both Classical and Contemporary. In the summer of her grade eleven year, Sasha attended the Bolshoi Ballet Academy's summer intensive where she was invited to be the second Canadian in history to attend the Bolshoi Ballet Academy in Moscow for her graduating year. Upon graduation, Sasha spent two years dancing with the Gelsey Kirkland Academy's studio company. Sasha has been accepted and attended various summer intensives throughout her adolescence, including The School of American Ballet, ABT, Princess Grace Academy, Royal Ballet School, Danish Ballet Masters, amongst others. She is excited as this is her first season as an apprentice with the company.

Mikael is originally from Italy and began his dance training at the age of 10 at the National Dance Academy in Rome under Nicoletta Pizzariello and Fabrizzio Podaliri. He has also participated in numerous workshops with master teachers such as Garrison Rochelle, Steve La Chance, Bill Goodson and Kledi Kadiu. He entered the Certificate Program at the Peridance Capezio Center in September 2017, and he is excited to also be apprenticing with the company.

Yarden was born in Israel. In 2010 she began her formal dance training at Lea Manor Dance School, where she completed her Royal Academy of Dance exams. At the age of 18, she moved to New York City and completed the two year Certificate Program at the Peridance Capezio Center. During the program, she had the opportunity to study with choreographers and master teachers such as Igal Perry, Jae Man Joo, Max Stone, Richard Chen See, Julia Ehrstrand and Diego Funes. She is excited to be an apprentice with Peridance Contemporary Dance Company.